As I type this, I have gulped back a mug of builder’s tea and a slice of multigrain toast with peanut butter: a mix of the very British and the very Canadian. Just like our research team.

We’ve been thinking about what people living in the U.K., wherever they were born, think of as British food. As part of our project on British food and national identity, we are compiling The New British Cookbook… and we’re looking to you, dear readers, to help us.

We’d love to hear from you about your favourite or most meaningful recipe–and, most importantly, what you’re actually eating on a day-to-day basis. We envision our (free) digital cookbook as something that builds on a long history of collaborative recipe collection and community cookbooks—and will allow us to learn about what food people are eating in Britain today.

Do you have a treasured family cookbook with notations in the margins? Or piles of recipes snipped out of magazines? Or a collection of handwritten recipe notecards? Or maybe you have lots of online recipes bookmarked? This type of recipe collection has a long history. 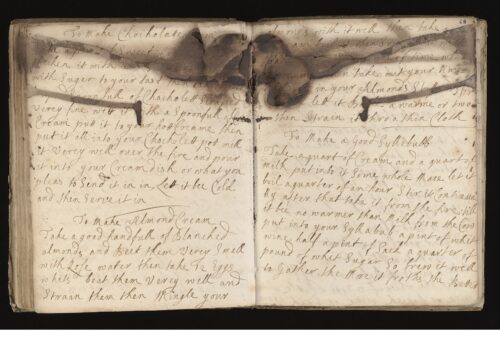 Wellcome Collection MS 4051 (London). A burn mark in the middle of the manuscript, which evokes the use of the book beside the fire.

The family recipe book as we know it has its roots in the seventeenth century and, from the outset, was connected to class and education. Well-to-do, literate women began to compile collections of recipes—laboriously written with pen and ink on expensive rag paper. Notes in the margins, crossings-out and insertions all point to the ways that the recipes were tested and approved (or rejected) by their compilers. A woman would have needed a well-equipped kitchen with access to a range of ingredients to test recipes so comprehensively and to be willing to fail; even recording recipes in a book required leisure time and literacy.

When it came to collecting recipes, it was never a solitary endeavour. Recipes were often labelled with the names of people who shared them, perhaps even written in their hand. Compilers might copy recipes from printed books or, by the eighteenth century, even clip them out of newspapers, just as we do today. As Elaine Leong argues in her recent book Recipes and Everyday Knowledge, such books functioned as a compact archive, containing networks of friends, family history, and (of course) everyday knowledge.

In the eighteenth century, printed recipe books became increasingly popular with the growing middle class. Recipe books offered the certainty of knowledge, often including ‘how to’ sections on choosing fresh meat or seasonal vegetables. Printed books may have lost the sense of personalisation and family history of their handwritten counterparts, but they offered aspirational futures to their readers, as Gilly Lehmann points out. Although printed books had specific authors, writers and publishers happily lifted recipes from each other, earlier recipe books and even previous editions. The printed books were every bit as ‘collaborative’ as manuscript ones, even if they did not acknowledge their sources.

What is a community cookbook?

Community cookbooks, which have been around since the nineteenth century and continue to be popular in North America, have similarities to their seventeenth-century predecessors; they are collaborative efforts of memory and community building. 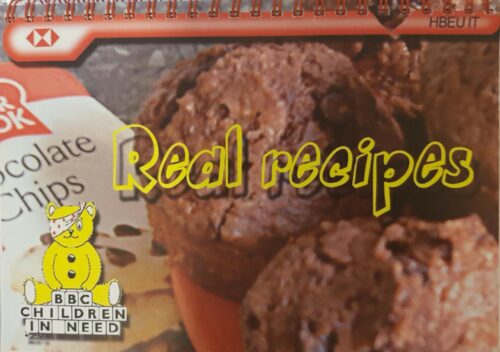 An example of a fundraising community cookbook created by HSBC employees in IT from across the EU, 2004.

The past few years has brought a resurgence of the community cookbook tradition in the United Kingdom, with celebrity-led fundraising projects. These include Meghan Markle’s Together: Our Community Cookbook (2018) to raise money for the Hubb community kitchen (run by several women who survived the Grenfell Tower fire) and Riaz Phillip’s Community Comfort (2020) to support the Majonzi Covid-19 Bereavement Fund. 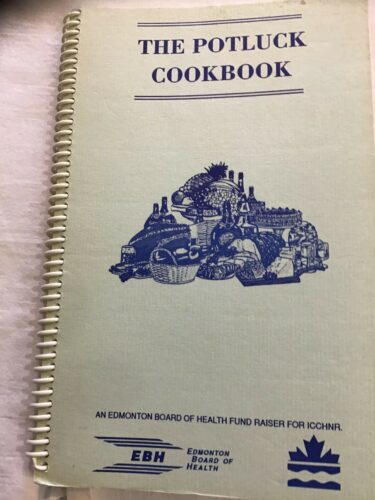 An example of a book from Edmonton, Canada (c. 1980s). Courtesy of Eluned Smith.

Although the most famous community cookbooks tend to have a touch of celebrity—including the The Suffrage Cook Book of 1915 (reprinted in 2018), which included recipes from Jack London and Charlotte Perkins Gilman—the tradition is much more homely. Take, for example, Something to Share (2018), which Refugee Action-Colchester published to raise funds for its efforts and to draw attention to Colchester’s growing multiculturalism. The contributors to this project also shared their stories behind the food. 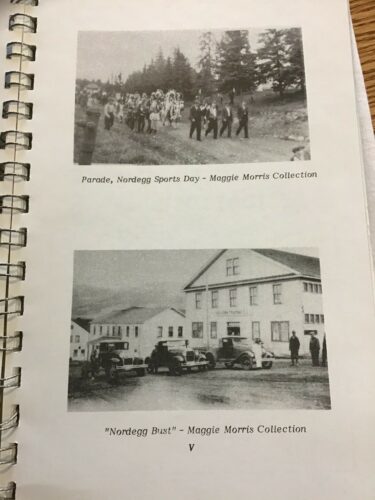 An example of the community cookbook being used to recreate a common history. This image comes from Miner’s Menus, compiled by the Nordegg Historic Interest Group in Rocky Mountain House, Canada. Nordegg was a coal-mining town in the Rocky Mountains, which closed down in 1955. The book was compiled c. 1970 through the contributions of previous inhabitants. My aunt, Margaret Gilbertson, shared a recipe for Welsh Cakes, reflecting both my maternal family’s heritage and one of the town’s ethnic groups. Courtesy of Eluned Smith.

The Refugee Action book is typical of the community cookbook tradition. Such cookbooks are collections of recipes compiled (typically) by a group of women as part of a fundraising project—perhaps for a Parent-Teacher Association, a church group, or a particular cause. The books incorporate the recipes of the group’s members and the intended audience is the community as a whole, plus their friends and family. As with Something to Share, the recipes are often accompanied by stories about the food, although other tidbits are common, such as proverbial statements or jokes or—especially in the case of school-related projects–drawings and poems. The name of each contributor always appears besides their recipe.

An example of the sort of tidbit that might be found in a community cookbook. This example is from the Hillcrest United Church Cookbook (1966) in Fort Nelson, Canada. Courtesy of Eluned Smith.

Writer Gillian Polack, reflecting on the theft of her cookbook collection, described the cultural importance of community cookbooks:

If I were making a time capsule, I would include a community cookbook. It would tell the person who opened the time capsule so much about the people who buried it. What recipes were worth including in the book? What group of people does the volume’s creation tell us about and what background do they share?

Our New British Cookbook follows in this community tradition. We are looking for contributions of recipes from our virtual community. We want to learn more about what recipes you think are worth including. And, most of all, we want to think about what ‘British’ food looks like in the multicultural context of the United Kingdom in 2020.

Please send in your recipe contribution – along with your story about the food, or even just a joke, proverb, or drawing… We’re not looking for things specifically defined as ‘British’, but rather what people living in the United Kingdom are actually eating on a day-to-day basis.

We’re interested in what you really eat, not just aspire to eating. Please send your recipes to us at: newbritishcookbook@gmail.com.

Join us to talk about The New British Cookbook

On 13 November, team members Rachel Rich and Lisa Smith, along with food writer Leah Hyslop, are hosting a virtual event on ‘The New British Cookbook’, as part of the Being Human Festival. We’ll be talking more about the recipes contributed to our cookbook can tell us about food in the United Kingdom today.

Lecturer in History, University of Essex